Welcome.  We're glad you're visiting our website.  Give us a good look over and be sure to sign our guestbook before you leave.

If you would like to join The Bradt Family Society and subscribe to the Bradt Family News, just fill out our membership/subscription form and mail it along with your dues to the address indicated. We have just added a PayPal Subscribe button for those who wish to pay on-line, but new members must still send us their membership form so we know who you are. Click on the following link to view and then right click on the document to print:

NOTE: It would be extremely helpful if current members would send an email to our Sec/Treasure, Anne Holzinger, BRADTFSsec@hotmail.com., to ensure we credit the correct member to Payment via PayPal. 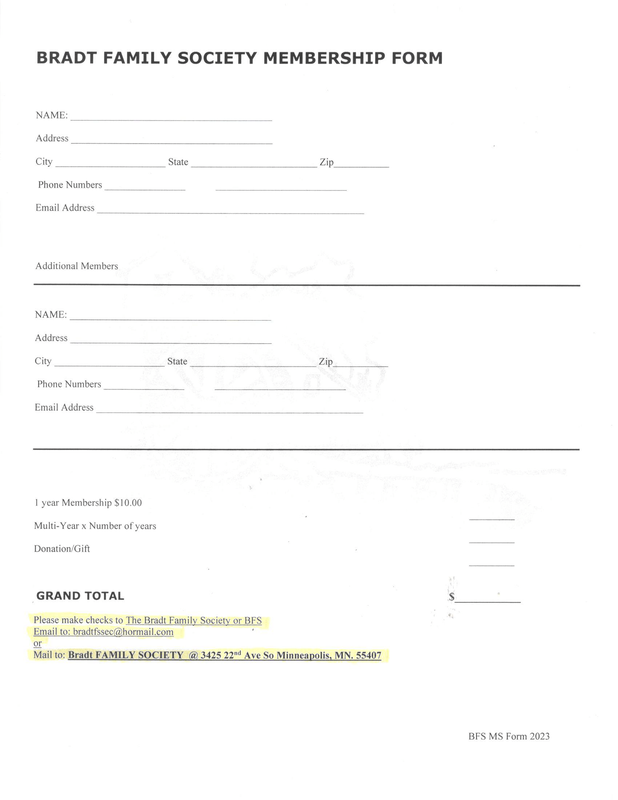 If you can not download, contact: Niskybrat@aol.com for a copy.
Currently looking for a gifted webmaster...any volunteers? Email me at niskybrat@aol.com for interview.
The letter below was Ken Bradt's invitation to the 1987 Bradt Family Reunion.  It has been slightly edited with his permission.

It was on August 26, 1636 (Gregorian Calendar), that Albert Andriesse (Bratt), originally of Fredrikstad, Norway, signed an agreement in Amsterdam, Holland, with the Dutch patroon, Kiliaen van Rensselaer, to come to the New World.  On October 8, he and his wife, Annetje Barents, two children, and probably also his brother Arent, set sail from Holland on the "Rensselaerswyck".  On November 2, the ship's log records the birth of a third child, in the midst of heavy weather and very high seas.  Baptized "Storm" and later known as Storm van der Zee ("Storm from the sea"), his offspring took on "Vanderzee" as their last name.

After some time in port in England to repair the damage caused by the storm, they set out again across the Atlantic, arriving in New Amsterdam (New York) on March 4, 1637.  They proceeded up the Hudson River to Rensselaerswyck (Albany), where Albert set about the operation of "two large sawmills", run by a "powerful waterfall".  This was on a creek which the Dutch, who referred to the Norwegian as "De Noorman", called the "Normanskill" (Northman's creek).

Albert, an energetic and sometimes irascible character, soon split with his partners and started growing tobacco (something he apparently learned in Holland).  Several years later he assumed sole responsibility for the sawmills, acquired property on Manhattan Island, and developed a close business relationship with one of his former partners.  Van Rensselaer frequently had bones to pick with many of his tenants, including Albert.  But at the death of Jeremias van Rensselaer, director of Rensselaerswyck and grandson of the first patroon, Albert was invited to the funeral.

In his personal life, Albert prospered, raised a large family, and married two other women after Annetje died (the first being the widow of his other partner in the sawmill).  He survived to be cited in his obituary in 1686 as one of the oldest inhabitants of the colony.  Still, according to contemporary historian Stefan Bielinski, it took the customary three generations before the Bradt "foreigners" were fully accepted into Dutch Albany society.

Brother Arent, meanwhile, had become one of the founders of Schenectady.  (Most of) His offspring survived the Indian massacre of 1690, and have played a prominent role in the life of that city ever since.  One of them, Jannetje Bradt, gave birth to a future governor of New York, Joseph C. Yates, 1823-25.

While her sister, Catalina, married John Butler, a close associate of Sir William Johnson, the North American Indian Superintendent, and fled to Canada during the American Revolution. ...I didn't (know any of this) until a few years ago when I started poking into the family history and corresponding with other Bradts.  One of the surprising things I learned is that with only a few exceptions (e.g., the descendants of Morris Bradt who came from Germany in the 1850s), all persons in North America today of the spelling "Bradt", as well as many Bratts, Brotts, Brodts, and Vanderzees, descended from Albert or Arent.

Over the years, the Bradts have occupied every station in life, from the poor house to Who's Who, from pillar of the community to the average Joe.  The entrepreneurs among them have headed every type of organization, from the Maytag Corporation, to a biscuit manufacturer, to the corner tavern (e.g., Isaac Bradt's 1880s establishment on Green Street in Albany.)

Some of us who have been swapping these tales for years have often said how much fun it would be to have a grand national get-together, where we could share these stories and learn more about how the Bratts have contributed to the great national drama(s), Canadian and U.S.  With the 350th anniversary as incentive, we are about to make it happen...

--Ken Bradt, from the invitation letter mailed to phone book-listed Bratts (of several spellings) in 1986.  My thanks to Ken for permission to use this.